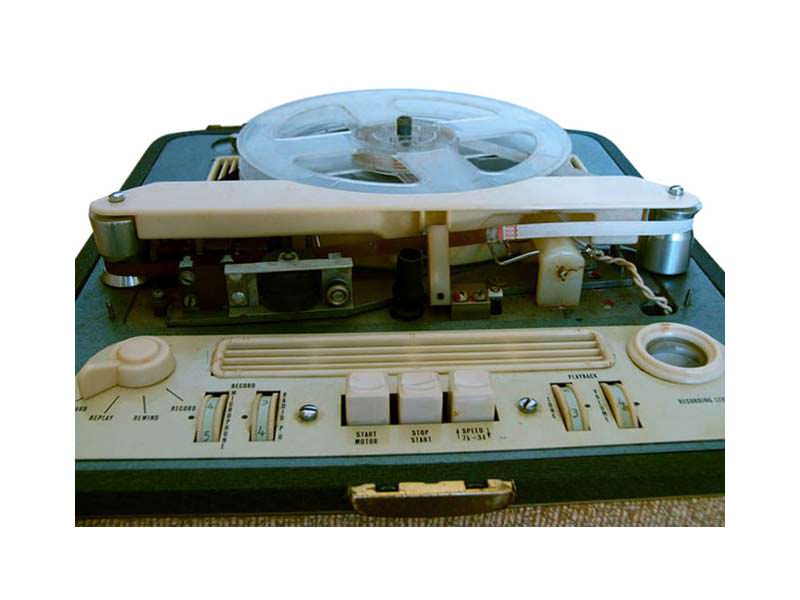 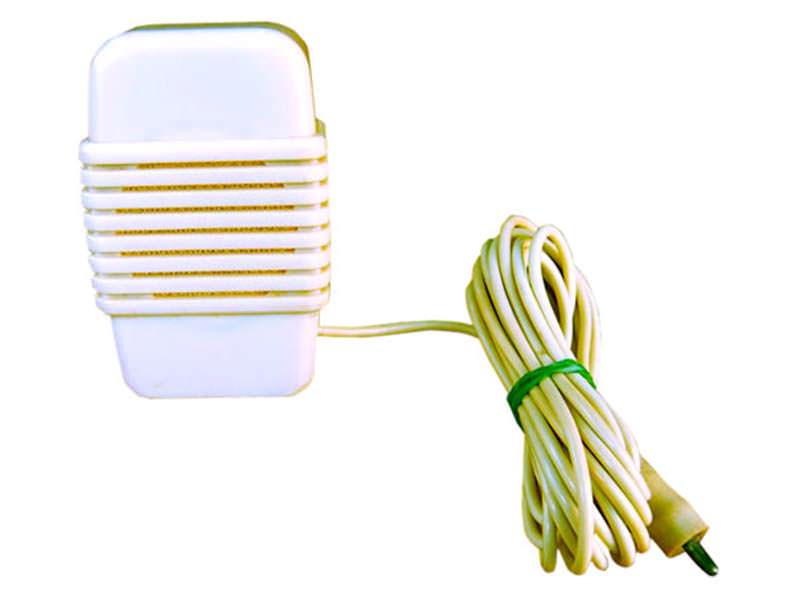 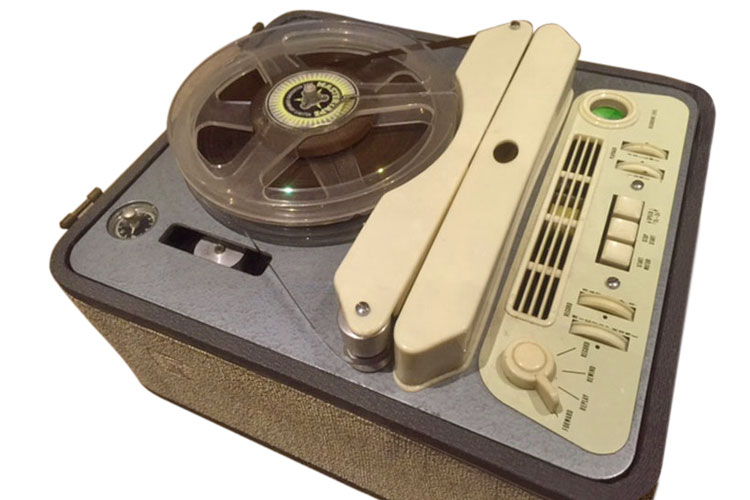 The following was received by the Get Reel website some years ago, from subscriber Jim Cladingboel who wrote:

“… Way back in 1961, in London, before emigrating to Oz, I bought a most unusual machine which was reviewed / advertised in Practical Wireless and/or Wireless World around July/August of that year. It was named “Countess” but was unbranded because, the review stated, the major (?) manufacturer had only designed and built this unit in order to keep their production lines working during an economic downturn and wanted no publicity!

I wonder if you or any of your friends can remember anything more about this unit. It is a mains-portable, three-head mono recorder, which has the two 7″ spools situated one above the other !! The take-up spool is directly above the supply spool, each driven by a pair of motors in
a single housing, having concentric shafts. This enables the recorder to be only about 13½ x 12 x 8 inches overall. Recording level was shown on the exposed head of a valve which lit up bright green. Tape progress was measured on an analogue clock face.

In an effort to find out more about this recorder, and especially who made it, I have been in touch with the Curator, Information Technology, at the Powerhouse Museum in Sydney for more than a year and, through him, some of his colleagues in the Science Museum in London. However, I have had no luck at all from these sources. A colleague in London, found an ad in the “Hi-Fi News” of November 1961, where it was being remaindered at 30 guineas.

I had paid about 89 guineas!! It was he who told me about your excellent web site and suggested you may be able to assist me due to your extensive knowledge on this subject.

I would very much appreciate it if you can enlighten me further on my “Countess”. Who built it? Was the excuse for anonymity genuine or just a clever marketing ploy? Or was it just someone unloading a mono machine before stereo swamped the market? Is it relatively common among collectors, with spare parts available…..? “

Never able to resist a challenge, “Get Reel” delved into its archives and discovered the original “remaindered’ ad, PLUS the following New Product Review for the exact same recorder under a different name (Timbra) and a 1961 Test Report.

“..The Timbra is manufactured in Holland, and has an interesting specification.  The use of spools one above the other has made it possible to produce a recorder using 7-inch spools and yet measuring only 11¼ x 12½ x 6½ inches. The weight is quite high, 39lbs., this is due to the very robust construction of deck and case and outsize transformers and motors.  Three hysteresis motors are used giving very good speed stability, wow and flutter figures of 0.075% are claimed and a rewind time of 40 seconds for 1,200ft of tape.  It operates at two speeds, 3¾ and 1 7/8 ips, with a claimed frequency response at these speeds of 30 – 18kHz and 30 – 12,500 respectively (both ±2dB).  A monitoring replay head is fitted with separate amplifier for monitoring recorded material.  There are built-in mixing facilities, a clock-type indicator; magic eye level indicator, full range tone and volume controls and multi-level inputs and outputs.

The price is £93 9s.  We are eagerly awaiting this most unusual recorder for review.

How strange then, that less than 18 months later, the following ad appeared in Britain in a June 1961 issue of ‘The Tape Recorder’ Magazine:

THE designer of a tape recorder is faced with a number of problems, not the least of them being how the final machine shall look when it is presented to the customer. Part of this particular problem is obviously concerned with the layout of the tape transport mechanism, especially in so far as this affects the size of tape reel that can be accommodated.

On the one hand the necessity for a long playing time per reel points to the need for the largest possible reel size, but if a large reel is to be accommodated the tape deck and hence the size of the machine will also tend to be rather large.

For a given playing time this situation can be somewhat eased by the use of smaller reels and thinner tape, but if large reels could be accommodated without an increase in the size of the machine then thin tape would give a corresponding increase in playing time.

The Countess provides an ingenious solution to this problem. Although it is only 13 ¼ inches long, 11 ¾ inches wide and 7 ¾ inches high it can accommodate seven-inch reels of tape. This might be thought to be impossible since two seven-inch reels will take up fourteen inches and the largest dimension of the machine is only thirteen and a quarter but nevertheless it has been achieved.

The trick is to place the take-up spool on top of the feed spool and not beside it, so that two spools virtually take up the space of one. The spindle upon which they turn is in fact two spindles concentrically mounted so that the variations in speed as the tape moves from one to the other do not conflict.

The designer’s ingenuity does not end here, however, since a difficulty arises in that the tape has to climb from the feed spool at the lower level, past the heads to the take-up spool at a somewhat higher level. It is obviously necessary that the tape should pass all the head at right angles to the gaps, so that no azimuth error occurs, or tapes recorded on this machine would not be playable on another machine.

This could of course be done by arranging that the heads were mounted in such a way that the gaps were always perpendicular to the sloping tapes, but this would complicate the design. Instead, the heads are mounted in the normal way on the flat deck plate and a lever coupled to the starting mechanism pulls the tape down as it is set in motion, so that it runs horizontally past the heads before rising to the take up spool.

The machine is provided with a number of controls. From left to right these are firstly the selector switch for forward, replay, rewind and record; and secondly the microphone recording level control, followed by the ” pick-up or radio ” recording level control. These two controls provide mixing facilities for the two inputs during recording.

The motor on/off switch and the mechanism stop/start are interlocked so that although it is possible, even desirable, to start the motor with its button before pressing the second button to set the tape moving, thus ensuring clean rapid start of the tape, it is not possible to switch off the motor before the mechanism has been stopped. A further interlock occurs in that it is not possible to move the selector switch whilst the stop/ start switch is in the start position. This prevents accidental erasure of tapes. Two further controls complete the operating equipment, the playback tone control and volume control. Recording level indication is by means of a very clear “magic eye ” and a “clock” type tape duration indicator is provided.

Input sockets for microphone at high impedance and for “pick-up or radio” are provided on a panel below the controls on the front of the cabinet. Also on this panel are two sets of output sockets, a screened type for a medium impedance feed to an external amplifier and the second a pair of sockets for an external loudspeaker. The right hand socket of this pair incorporates a switch which mutes the built-in loudspeaker when a plug is inserted. Plugs for all these sockets are provided with the machine. The microphone provided with the machine is an Acos crystal type.

Some further unusual features for a machine in this price range are worth mentioning. No pressure pad is used on any of the heads or guides to maintain tape tension, the necessary tension being provided by reverse action of the two spooling motors during record and replay. This is a feature seldom found in domestic equipment, and enables marking of the tape on the replay head so that accurate editing can be carried out. In order to do this the front head cover is easily removable.

The Countess has a further very important feature – it is fitted with three tape heads: erase, record and playback. This feature according to the handbook supplied, enables the record and playback amplifiers to be better designed for their respective functions. This statement is undoubtedly true, but a far more important outcome of the three head design is that the replay head is used while recording to feed a low level signal to the loudspeaker so that the actual recording on the tape is monitored.

This facility is unique in a machine at this price; indeed, in most domestic machines at any price the monitoring during recording is only a feed from the input to the machine and gives no guarantee that the signal is in fact being recorded on the tape. It is a pity that the designer of this machine omitted a switch by which the input and output could have been compared. It is, however, comparatively simple to rig up such a switch if the equipment is used with an external amplifier.

Yet another useful facility with this excellent machine is that it may be used as a “straight-through” amplifier with mixing facilities for microphone and pick-up by switching the system selector to “forward” but not starting the tape.

The machine was subjected to the usual technical tests and the replay response to the standard tape at 7½ ips, together with the record/replay curves for 7½ and 3¾ ips are shown in the accompanying graph. These responses are close to the maker’s quoted specification having a slight rise in the 8-10,000 cps region, where this particular model was 1 dB outside the specification.

Some compensation could be made for this by using the tone control, but the 12,000 cps response was then slightly reduced. Wow and flutter were negligible at 7½ ips and barely perceptible at 3¾ ips. The signal-to-noise ratio was good.

The mechanical design and construction of this machine is what one would have expected from its specification and performance. The whole assembly is mounted on a heavy die-cast deck plate for maximum rigidity, and the electronic department is well laid out for ease of servicing, should this become necessary

The motors are large in size, the two spooling motors being most ingeniously mounted in one assembly. The capstan motor drives the capstan assembly by means of a belt and a very large and heavy fly wheel, together with a larger than usual capstan diameter, plays no small part in the low wow and flutter content. This machine originally retailed in this country for 89 gns, and at that price it was well worth the money. It is now available at the extraordinary price of 30 gns. and at this price is undoubtedly the bargain of the year.