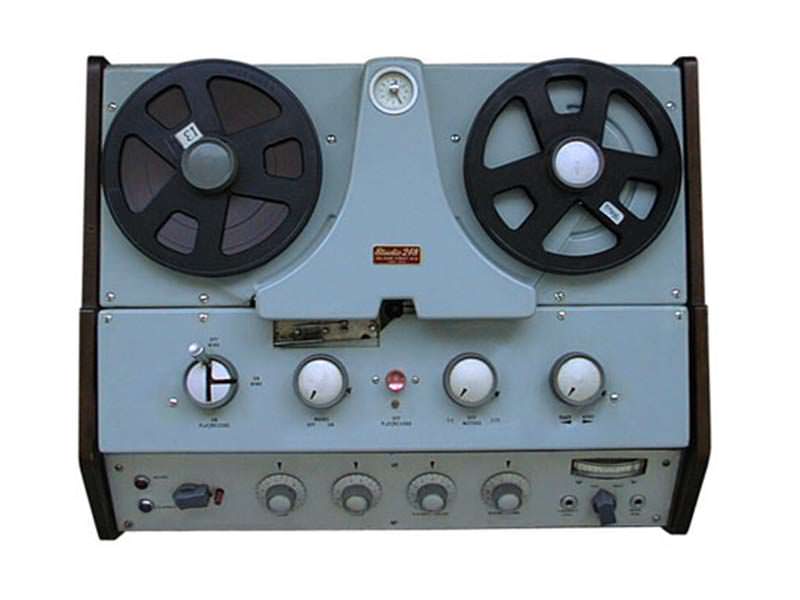 One or more images from source: https://www.vintagerecorders.co.uk/ 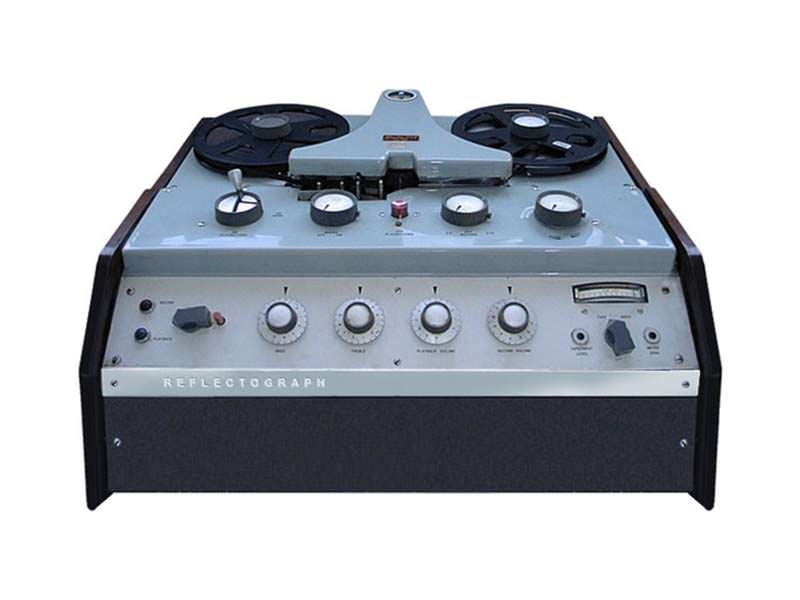 One or more images from source: https://www.vintagerecorders.co.uk/

Wow and Flutter:better than 0.2 per cent at 7½ ips

The Reflectograph 248 came in two models. A (half-track) and B (quarter-track).
Marketed as a ‘professional type’ recorder it unfortunately lacked the high speed of 15 ips and 10½ spool capacity (8¼” maximum reels) normally associated with that type of equipment and as a result was not particularly popular among professionals.
The deck featured three motors, three heads and separate record/playback
amplifiers. The same deck was also utilised in the Dynatron Specialist and the Specialist 1200.

IN a recent review in this journal, my colleague, Alan Beautement, had cause to enthuse over a particularly fine example of the British tape recording manufacturers’ work at its best, and to bewail the fact that he was able to have it in his possession for so short a time. He might well have been talking about the Reflectograph Model A (he wasn’t!), for precisely the same feelings are in the mind of this reviewer concerning this, probably the finest tape recording machine available in this country under £120 -the actual price is £110 5s.

This machine has more professional features than any other domestic machine at this price; indeed, the manufacturers call it a professional machine. A statement of this sort invites comparison with the machines used by broadcasting and recording organisations costing £500 each and more, and in fairness, as one might expect, such a comparison would show a number of points in favour of the more expensive machines. This is not to say, however, that this machine has any serious faults at all, it has not, and to repeat, this reviewer who frequently works with professional machines, would be very glad to possess one.

The basis of this recorder is the Multimusic tape deck. This deck incorporates, to quote the excellent instruction manual, “many novel features which provide for extreme reliability, simple operation and particular ease of tape editing.” Two tape speeds arc provided, 7½ and 3¾ ips, and the machine will accommodate 8¼ inch reels of tape.

The deck is powered by three motors: two Garrard spooling motors with the spool hubs mounted directly on the motor spindles, and the famous heavy duty Papst capstan motor, the capstan itself being an extension of the motor shaft. The use of this particular capstan motor can almost be said to guarantee that the flutter figure will be low.

Tape tension is provided by driving the feed spool in the reverse direction to the take-up spool during recording and reproduction. This method is assisted by a pressure pad on the second head only, combined with guide posts which keep the tape wrapped round the head. Fast forward and reverse spooling is provided and this particular model took under 40 seconds to wind 1,200 feet of tape. One of the professional features of this machine is seen here in that the speed of fast wind is variable, one control giving an infinite range from maximum forward speed through zero to maximum rewind speed. By the use of this control, a particular passage from a recording can be found very rapidly and editing is made simpler.

The tape deck itself carries five controls, the first of these is the function lever, by the use of which the tape can be set in motion either for record, play or fast wind. The second control is the mains on/off switch for the complete equipment. Operating this switch turns on all the amplifiers and starts the capstan motor. The capstan motor is thus running continuously all the while the equipment is switched on and this enables the machine to accelerate the tape to full play speed in 1/10th second.

The third control is a large red pushbutton, which releases the solenoid holding the pinch wheel and tape guide post assembly in the record or play position and thus stops the tape moving. The machine should not be stopped by moving the function lever manually to the off position, except on fast wind when the red button is inoperative.

The fourth control on the tape deck is the tape speed selector knob and has three positions – 7½, off and 3¾ ips. The off position is necessary in order to prevent damage to the capstan motor, since the speed change is effected by switching of the motor windings. The fifth control is the speed control for fast wind. Also on the deck unit is a clock type tape position indicator.

From a description of the deck we move to the electronic part of the instrument, and here again many professional features are found. Two complete amplifiers are provided, the record amplifier feeding the record head and designed specifically for this function, and the replay amplifier fed from the replay head and feeding into a large Goodmans 10 x 7 inch high quality loudspeaker.

The provision of two amplifiers, one for record and one for play, not only enables each to be designed for maximum performance but provides monitoring of the recording from the tape whilst it is being made. The amplifier controls are mounted on a sloping panel below the deck controls.

From left to right, the first control is the record/playback switch which cannot be moved to the record position without pressing down the safety button alongside it thus preventing accidental erasure of a valuable recording. A further safeguard in this respect is that an electrical interlock exists between this switch and the function lever so that the tape cannot be rewound whilst the record/play switch is in the “record” position, again avoiding accidental erasure. A further safeguard exists in that indicator lamps are provided to show whether the machine is switched to record or play.

The second and third controls on the amplifier panel are the bass and treble tone controls, part of the replay amplifier. Cut and boost are provided on both these controls and both are marked with a “flat” position which gives the standard CCIR characteristic. The fourth control is the volume control for playback which has a calibrated skirt. This knob, of course, also controls the monitor level whilst recording. The remainder of the amplifier panel carries the record volume control, also with a calibrated skirt, and the input level meter. This is an edgewise mounted type and is exceptionally easy to read. It is provided with a screwdriver zero adjustment.

Also on this section of the panel is the comparison switch which enables direct comparison between the incoming material and the output from the tape to be heard on the loudspeaker. Another screwdriver adjustment enables the level of these two feeds to be made equal for easy comparison.

Input sockets for a high impedance microphone at low level, and radio at high level are provided, no mixing facilities being available. Although it is not necessary to remove these plugs during playback, it is not possible to use the microphone socket if there is a plug in the radio input.

The whole equipment is elegantly styled and mounted in a frame with polished wood ends, one of which carries the loudspeaker. Easy access to the interior is available for servicing, by the removal of the front and bottom panels. The wooden side panel? can be removed completely, if it is desired to install the equipment into existing furniture.

The machine was subjected to the usual technical tests. Firstly, the replay response was checked, using the standard CCIR tape at 7½ ips. and on the machine sent for review a marked dip of some 14 dB occurred at 10,000 cps. On checking the overall record/replay response this dip did not occur and the reviewer was led to the conclusion that the azimuth of the recording heads had been incorrectly adjusted, possibly due to a defective line-up tape used during the final setting up of the machine at the factory.

The procedure for this would be to use the line-up tape to set the replay head azimuth (to make sure that the head gap was at right angles to the tape), and after this had been adjusted, to set the record head azimuth by recording on another tape and listening on the previously adjusted head, thus setting the two heads at a similar angle.

It can be seen that the accuracy of this operation depends on the accuracy of the original test tape. If the azimuth is set at any angle other than 90 degrees to the tape, loss of high frequencies will occur when playing a tape such as the CCIR test tape which has been recorded with an azimuth set accurately at 90 degrees. However, if the record and replay heads are both set at the same angle, any angle, then the machine will replay perfectly satisfactorily recordings made by itself. This was evidently happening in the present case. The azimuth seals were therefore broken and the heads set correctly in the manner described. A great improvement was now noted, and the frequency response curves are as shown in the accompanying graph.

The curves were taken with the tone control set at zero position. and the very slight discrepancies at the low frequency ends at 7½ ips, and the high frequency end at 3¾ ips. could easily be compensated for by suitable adjustment of these controls. The machine was well inside the manufacturer’s specification, with wow and flutter fulfilling their quota of less than 0.2 per cent at 7½ ips.

A few adverse comments must be made about this machine, good though it is.

Lastly, I would fault the machine from the professiona1 point of view, in that it has not a 15 ips speed available, neither will it take professional size 10 inch spools with NAB centres.

The points mentioned above are all of them minor ones, mainly directed at the claim that this is a professional machine, and I would like to repeat that this machine is among the finest domestic tape recorders I have yet seen.