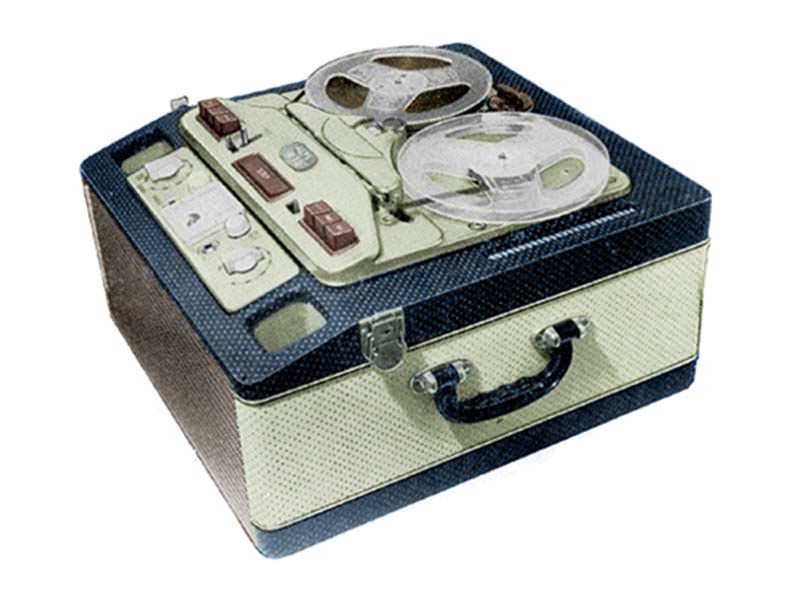 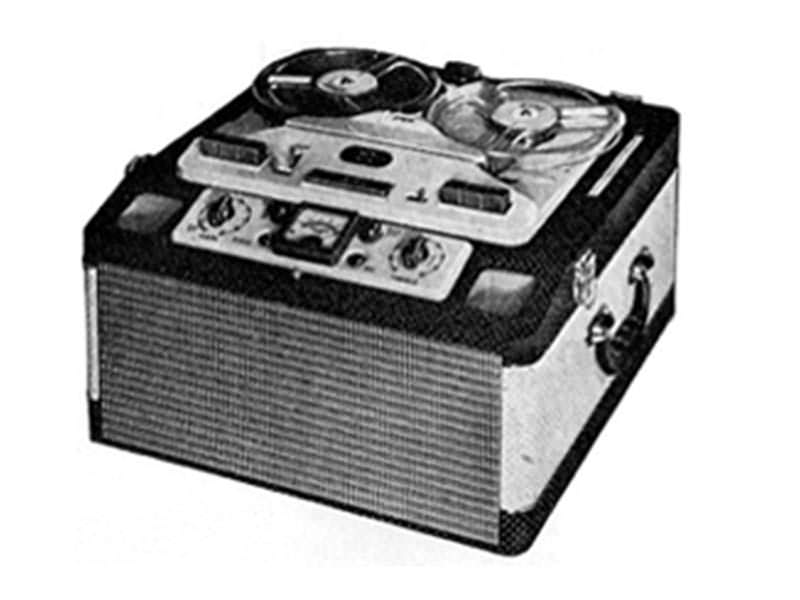 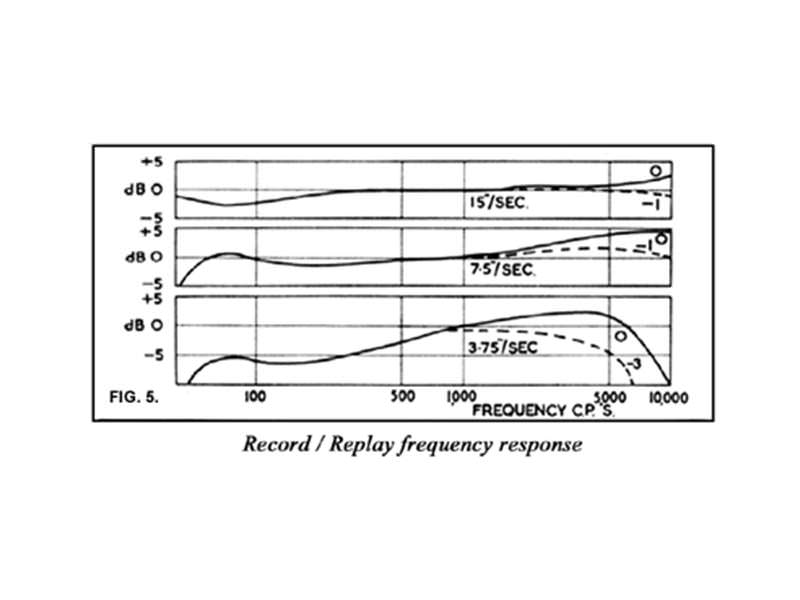 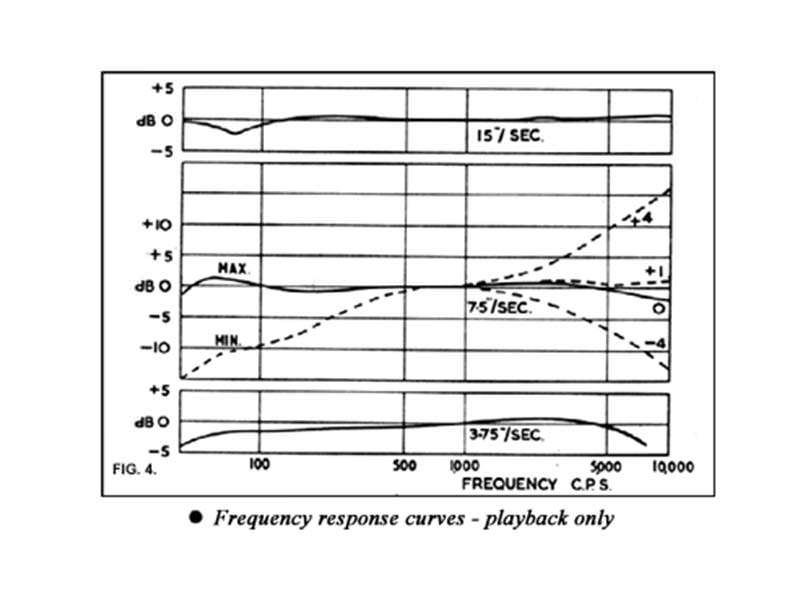 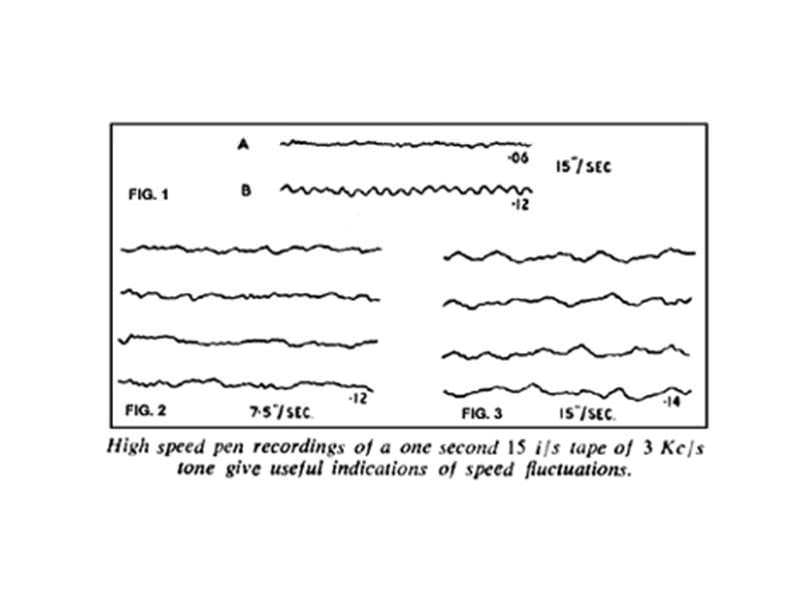 A three speed, 2 motor recorder using the popular Collaro Mk IV
deck, the REPS R40 was a half-track mono machine with provision for a
stereo head (to be used in conjunction with an external amplifier).
The REPS company hand-built all the R series machines, re-finishing the
moving parts of the Collaro deck to a high specification, thus reducing
wow & flutter to a minimum (see test report).
Three separate models were produced in the R series, the differences
as follows:


The REPS R40 recorder is not a mass produced machine, indeed each one is virtually handmade and individually adjusted for optimum mechanical and other performance.

For instance, all rotating parts in the Collaro deck are re-ground to very tight tolerances to reduce wow and flutter to the lowest possible level, special greasing and lubrication are used which give a sweet touch to the controls, and great care has obviously been taken in the playback equalisation, which together with the wow and flutter performance, and signal to noise ratio, reach professional standards.

Wow and flutter come first on our list of performance criteria, and I’m going to expand this section slightly to introduce the “fluttergram” which is a pen recording of the instantaneous short term speed variations and gives much more information than simple flutter bridge reading. Also it allows analysis of the causes of the wow and flutter in any given machine. The usual total RMS reading is also given with each graph.

The pen recordings of FIG. 1 cover time intervals of one second, and were taken at different times during the replay of a 15 ips 3kHz recording. The difference is due to the fact that small slightly called variations of speed may be out of phase on playback, so that they cancel as in A, or in phase, so that they add together as in B.

The actual speed variation is half that show in B. It is unusual to get such a clear recording of this effect, as it is generally obscured by other sources of wow and flutter in drive mechanism, and by tape flutter due to the elastic nature of the tape base.

The culprit in this case is probably the rubber-tyred idler pulley which couples the stepped motor shaft to the capstan flywheel, and the very clearness of the demonstration is a tribute to the work done in eliminating wow from the capstan and flywheel, and flutter from the motor pulley. The frequency of the cyclical variation is approximately 20Hz at 15 ips, and, as will be seen from FIGS. 2 and 3, falls to 10Hz at 7½ ips and 5Hz at 3¾ ips.

At lower speeds the wavelength of the recorded disturbance on the tape becomes only a fraction of an inch, and the cancellation takes place from cycle to cycle so that the RMS readings are steadier, and do not show the almost complete sustained cancellation which is so easily obtained at the high-speed. In case this should be thought to be a criticism let me underline the fact that the mean RMS wow and flutter readings for the three speeds are 0.1%, 0.12%, and 0.14% which are excellent by any standards, and are quite undetectable musically.

C.C.I.R. test tapes having surface induction characteristics of 35 microseconds, 100 microseconds, and 200 microseconds, were used to measure the playback only responses of FIG. 4. The solid line curves are with the bass tone control fully on, and the treble control at zero, and the dotted curves show the effect of the tone controls at 7½ ips speed. It will be seen that the most level response from the C.C.I.R. tape at this speed is obtained with the treble control at + 1. I should also explain that all these responses were taken from the external loudspeaker jack rather than the low-level line output jack.

This was because I soon found that the response and level from the line jack varied with the loading of the power amplifier, the reason being that the line jack is connected to a point within the feedback loop, and the amount of feedback depends on the loudspeaker load. This trouble could be killed by arranging for a 15 ohm load resistor to bridge the secondary of the output transformer whenever the loudspeaker is switched off, or the external load unplugged at present, a bass rise of 5dB occurs at 60Hz if the line jack is used with the loudspeaker off. The result of this bass peak is to give a pessimistic signal to noise – or rather signal to hum – ratio of -35dB on test tape level, or 47dB below theoretical peak recording level. When tested from the loudspeaker jack the figures were -41dB , and -53dB respectively. As the playback response is level at 50Hz under these conditions, be 53 dB below peak is the true signal to noise ratio, providing of course that a level + 12dB on test tape level can be recorded with negligible distortion.

Recording tests were next carried out at 7½ ips, and it was found that the test tape level of 10 lines per square centimeter at 1kHz, was recorded at 8 on the recording level meter, i.e. on the lower edge of the red segment. Full-scale, or 10 on the meter, recorded a level only 6dB above test tape level, and the input had to be increased by further 6dB to record true peak recording level. This recording was completely clean, showing no visible distortion on a C.R.T. , and confirms the peak signal to noise ratio as 53dB. Program tests with the meter kicking only occasionally into the red were slightly under-recorded, which shows that the electrical and mechanical dynamics of the meter allow it to indicate peaks to an accuracy of 2 or 3dB, and that the internal preset should be readjusted so that test tape level is recorded at a meter reading of 5, or mid-scale. Under these conditions, full-scale would truly indicate peak recording level, and occasional kicks into the red segment would give a fully recorded tape.

Record Play frequency runs were next made at the three speeds, and the responses with the tone controls out of action are shown by the solid line curves of FIG. 5. This indicates that pre-emphasis at 15 ips is almost exactly to the C.C.I.R. 35 microsecond characteristic, and that, with the tape sample provided, a slight over-correction of the high frequency pre-emphasis occurs at the two lower tape speeds.

At this point we have to abandon professional review standards, as it is not practicable in a machine in this price range to provide separate recording equalisers for each speed, which are adjustable for different samples of tape a compromise pre-emphasis must be adopted, and in the interest of signal to noise ratio it is better to err on the side of slight over pre-emphasis than the other way around.

The dotted curves show that the overall recorded/play responses can be made sensibly level by judicious use of the treble tone control.

The acoustic response of the loudspeaker and cabinet was next tested by loading a machine with a white noise test tape, and measuring the acoustic output on each side of the 25 noise bands on a calibrated microphone.

The response sounds smooth and well-balanced, and as the cone resonance is about 60Hz one gets the impression of much greater bass response than that revealed by the measurements. The lack of cabinet colouration, and forwards facing speaker, allows critical appraisal of recorded quality on location, although only a full range external speaker shows the full capabilities of the recorder.

Steady tone maximum undistorted power output was a little above 4 watts, but a pulsed tone test showed that peaks of a few milliseconds duration reached 8 watts without distortion. This is presumably due to the regulation characteristics of the power supply, and to the fact that the output stage is working in class AB.

The 1kHz noise band gave reference sound level of 10 dynes per square centimeter at one foot from the loudspeaker fret with a noise voltage across the internal speaker of 0.7 V RMS, so that they calculated maximum undistorted steady tone level is 105 phons and the output on short duration peaks can be about 108 phons.

Two refinements not mentioned so far are the head demagnetising switch, which operates when the volume control is turned fully anticlockwise, and the superimposing switch which is in the same position on the tone control. Details of these and all the other controls are given in the very comprehensive instruction book supplied with the recorder, which also gives full servicing data and maintenance instructions for the deck.

I found it very refreshing to test a British made recorder which not only met its specification, but exceeded the claimed performance at almost every point. The design and workmanship is such that for high-performance is likely to be maintained for a very long working life, and I feel confident in recommending it to anyone who is looking for a machine with a semi-professional performance at a domestic recorder price.

This review was submitted to the manufacturer, commented as follows:-
“The output stage is operated under low load conditions and bias is higher than class AB. Sine wave test will not give an indication of maximum power output. But under speech or music conditions peak power output is 10 to 12 watts, before distortion occurs.

This mode of operation was adopted to reduce the size of power supply with consequential reduction in weight and internal heat generated. “