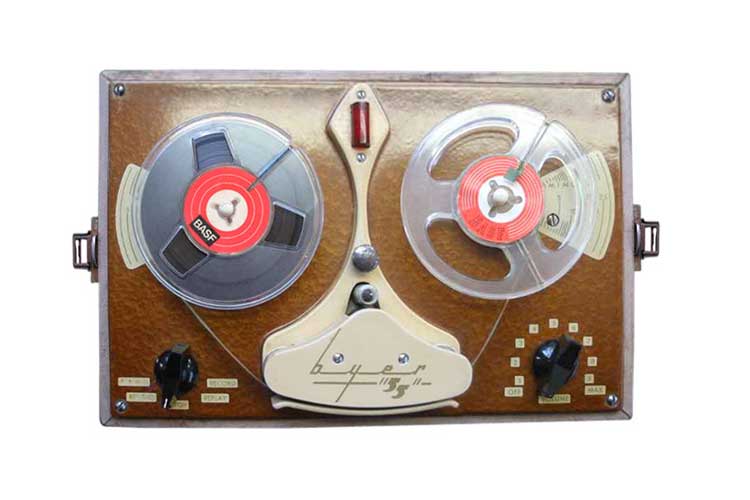 Probably the first truly ‘portable’ small recorder made in Australia, the Byer “55” was a full-track mono recorder with a single speed (3¾ ips) and a 5″ reel capacity.

The deck plate and all drive wheels of the “55” were precision engineered from cast aluminium which helped to keep the weight down to 18lbs (8.2 kg) – very light for the early 1950s. A single heavy duty synchronous motor was used.

Simple operating controls were incorporated in the Byer “55”, the 5-position function switch on the left side of the panel provided : FAST FORWARD, REWIND, STOP, REPLAY, and RECORD. Playing time was measured by markings on the deck.

Servicing was problematic due to the compact nature of the recorder. In order to re-fit or replace the main spool drive belt involved removal of the loudspeaker, which first required the removal of a capacitor. The speaker wires needed to be de-soldered as they were too short to allow reasonable speaker movement. Replacement of the N78 output tube necessitated the same procedure!

The “55” sold for £100 and was supplied with crystal microphone and carry cover.

Something new in the tape recorder field has been produced by Byer Industries in their newly released Tape Recorder Type 55. It is probably not only the smallest available with full facilities, but also the lightest in weight as well. It sells for less than £100.

The overall size of the recorder in its cabinet is 12 x 7¾ x 8in high, and its total weight in carrying cover, with microphone and tape, is 18lb.

Both these characteristics are made possible by an exceptionally neat design, by the use of cast aluminium for all metal work in the deck and chassis, and the use of a tape speed of 3¾ in per second with 5in reels. These reels carry 600ft of tape and allow the standard playing time of 30 minutes per reel.

Despite the slower speed, the reproduction is comparable with most tape recorders running at 7½ in per second, and is claimed to be comparable with that from an ordinary radio receiver. Under listening tests this claim would appear to be justified.

The handy size and light weight of the recorder are the two features which are immediately impressive, in addition to the plastic, zippered carrying cover which has the appearance of an overnight bag rather than a technical instrument case.

When operating the recorder, the smoothness and positive action of the changeover switch is worthy of special note. Both fast rewind and fast forward speeds are provided, and it is possible to rock the control backward and forward at any speed with no apparent danger of breaking the tape.

This is due to the ingenious and well-made deck, based on a cast aluminium panel. The various drive wheels are also of cast aluminium, turned and machined to fit, with bonded neoprene tyres giving very smooth running.

Only one motor is used, a heavy duty synchronous type similar to that used for the well-known Byer disc turntables, and shielded against hum pickup. It has a powerful, smooth output without any discernable flutter or wow in use.

The recorder has a built-in loud- speaker—Rola 5B—with jacks for any high impedance input from radio or microphone, and for an external 2-ohm loudspeaker. It has two full-track heads, one for recording and one for erase with a high frequency oscillator.

THE AMPLIFIER
The record-playback amplifier has three stages using two 6AU6, one 6BJ5, and one 6X4 rectifier, and is wired on a cast aluminium chassis built around the drive motor. The chassis in turn is suspended from the top panel, so that the entire recorder may be withdrawn from the case as a unit.

The top panel is finished in bronze enamel and ivory lacquer, the case in beige leatherette, the speaker grille in anodised aluminium, and the carry cover in tan PVC waterproof leather-cloth.

The Byer 55 gives the impression of being a well-engineered, true-to-label recorder which, because of its special features, should make quite a name for itself in the lower-priced field. It comes complete with a crystal type hand microphone and power cord.

This website uses cookies to improve your experience while you navigate through the website. Out of these, the cookies that are categorized as necessary are stored on your browser as they are essential for the working of basic functionalities of the website. We also use third-party cookies that help us analyze and understand how you use this website. These cookies will be stored in your browser only with your consent. You also have the option to opt-out of these cookies. But opting out of some of these cookies may affect your browsing experience.
Necessary Always Enabled

Any cookies that may not be particularly necessary for the website to function and is used specifically to collect user personal data via analytics, ads, other embedded contents are termed as non-necessary cookies. It is mandatory to procure user consent prior to running these cookies on your website.