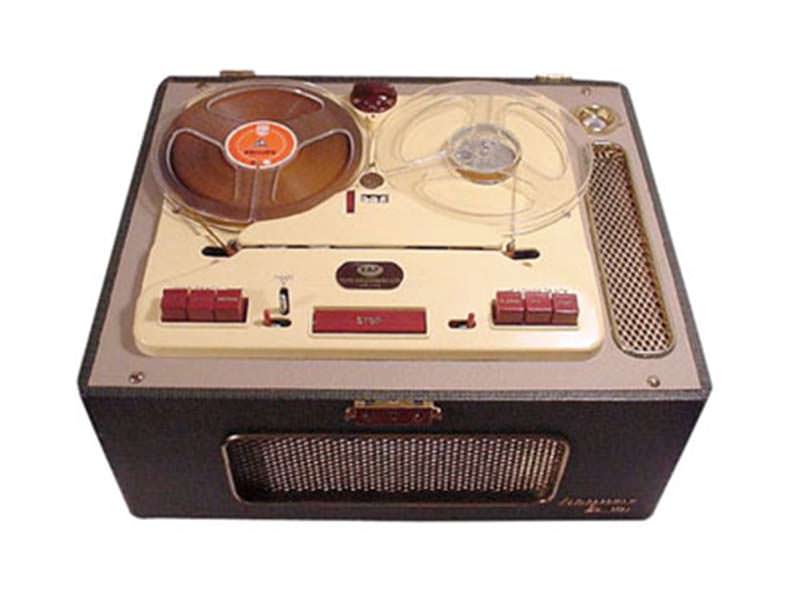 A general purpose tape recorder, this Elizabethan (one of their first) was a half-track mono machine utilising the Collaro Mk III two-motor tape transport.
A set of heads (erase and combined record/playback) and one motor was provided for each record/play direction, allowing continuous record/playback without the need to turn the reels.
Playing speeds of 15, 7½ & 3¾ ips were available and the recorder had a 7″ reel capacity.
This recorder only remained in production for a year before giving way to the more sophisticated Essex model.

This is the first opportunity I have had of living with a tape recorder that incorporates the Collaro Transcriptor tape deck. This report is therefore in a measure an appraisal of both the Collaro and the E.A.P. designs. Though I do not regard either as completely fulfilling all my demands-I have yet to find any tape recorder that does, other than the expensive professional models-I can say at once that the combination comes nearer to it than most others that I have yet seen.
It will be useful, I think, if I first of all set down the qualities that I should expect the ideal high fidelity tape recorder to have at the present stage of the art.
1. Tape speeds: 3¾ in./sec. and 7½ in/sec. The addition of a 15 in./sec. speed would be an advantage though not an essential for home use.

5. Speed accuracy: Better than 1 per cent.

9. Safety device to prevent inadvertent erase when in recording position.

13. A high impedance, high quality output should be available for use with high fidelity amplifiers.

14. Double record/replay head (top and bottom track) with magnetic gap of not more than 0.0002 in.

15. Motor reversing for record/replay in either direction.

17. If an internal loudspeaker with amplifier output stage is included, it should be regarded as a monitor (its frequency range will be limited in any case) and it should be possible to mute it when the output to a high fidelity amplifier is being used. The output transformer should be of “high fidelity” specification for the internal power so as to avoid distortion feedback to the earlier stages. As there are occasions when use of a quality external speaker system is possible, but no additional amplifier is available, it is an advantage to have a facility for connection of art external L.S. with muting of the internal L.S. This should be of 15 ohms impedance.

18. The mechanism, of course, should work with a minimum of noise, and there should be no wobble on the spool spindles such as to cause noisy rubbing of the tape.

19. The construction should be such as to facilitate servicing operations.
A desirable addition to a tape deck would be a facility for switching over the dual replay heads so that both top and bottom tracks could be used simultaneously for the reproduction of stereophonic tapes. This, however, hardly applies to a portable instrument since two identical replay amplifiers would be needed.
Now the foregoing is a very exacting specification and, as I have said, I know of no ordinary commercial tape recorder that can satisfy it completely. This Elizabethan de Luxe fulfils more of the conditions than most others I have come across.

(a). For frequency response and distortion content it is very nearly equal to the highest standard up to, but not including, the internal loudspeaker. One can take off the signal at the jack socket marked “Monitor” and feed a high fidelity amplifier with results as satisfactory as those from any other tape reproducer I have tried. Or one can feed a good external loudspeaker system and obtain a quality nearly as good though at a lower volume level. There is unfortunately a snag in each case. When one uses the Monitor socket the internal loudspeaker is still in use: the muting switch only works in conjunction with the external loudspeaker sockets. To use this switch therefore one should connect a load across those sockets. This should be of 3 ohms resistance which is what the external loudspeaker sockets are designed for. I would much sooner it had been 15 ohms which is nowadays the usual value for high fidelity loudspeaker systems and particularly those which have multiple speaker units fed through electrical cross-overs. This is the second snag I referred to above.

(b). All three tape speeds are catered for.

(c). The instrument records and plays back in either direction with a playback characteristic according to the modern International standard.

(d). Fast wind and re-wind are of appropriate speed.

(e). Flutter and wow and other irregularities of speed are inappreciable.

(f). Safety devices are incorporated so as to obviate tape spill and inadvertent erase.

(h). There is a special cueing device in the form of a cantilever which is operated by the tape position on the right-hand spool and in its turn operates a pointer on a scale. At first I had trouble with this. The spindle on which the cantilever is mounted is of only about it in. diameter and a slight displacement here means a comparatively large displacement at the other end which makes contact with the tape. Unless the fixing of this cantilever on the spindle is precise there is a likelihood that the other end will rub on the tape spool, particularly if this should be warped a little or should not accurately fit on the spool spindle. By dint of a little experiment, however, I was able to fix the cantilever on its spindle in such a position that it cleared all my spools. A small 1/16 in. Allen key is needed for this. Fortunately, I happened to have one. They only cost 3d.

(i). I was also able to cure another trouble which I almost always meet with on tape recorders. That is a tendency for the edge of the tape to rub against the upper inner face of the spool when it enters from the recording slot. This can make an annoying err, err, err sort of noise. Fortunately, on the Collaro deck there is between the slot and each spool a spindle which serves the purpose of putting a tension on the tape, thereby avoiding tape spill. I therefore tried the expedient of putting a O.B.A. spacing washer over this spindle and of appropriate weight to depress the tape just enough to clear the edge of the tape spool. Incidentally, there is no untoward effect on the edge of the tape since the spacing washer rotates round the spindle. I found it well worth while to have one or two washers of different weights handy since different spools require different treatment. Obviously, no tape deck manufacturer could cope with such large irregularities as one finds in tape spools and it is therefore a distinct virtue in this deck that one can deal with this annoyance in such a simple way.

(j). Unfortunately, the deck is too small to accommodate spools of diameter larger than 7 in. But this is not the disadvantage it used to be when a 7 in. spool only held 1,200 ft. of tape.

(k). There is a recording level device in the form of a magic eye but this does not give a double operating image of the type which some recorders employ to denote minimum level as well as maximum. Moreover, I found its value considerably diminished by the fact that it only came into operation whilst the tape was actually moving. This meant that after a preliminary trial to set the gain controls at an appropriate level (having regard of course to the strength of the input signal) one had to wind the tape back again to the starting point. Sometimes this does not matter, but there are occasions when the time factor is of importance. On those occasions one really needs to have the level indicator in operation before the tape begins to move.

(l). The tone control operates on the treble only, the requisite bass equalisation being provided in a pre-set circuit. Some people prefer to have independent bass and treble controls. But a bass boost is really unnecessary, and it may be argued undesirable, in an instrument of this calibre. If the output is taken to a high fidelity amplifier the requisite control will be there: if its separate amplifier is not used a substantial bass boost is undesirable in an amplifier and loudspeaker system of this calibre.

(m). The two inputs of 3 mV and 200 mV sensitivity are adequate. The latter, however, is only of real value when a separate preamplifier is in operation, unless the 3¾ in./sec. speed is also used. At the moment I know of no pickup with a 200 mV output which has the frequency range which the recorder can effectively handle at 7½ in./sec. When the 3 mV input is used care has to be taken not to feed in such a high input as to overload the first stage.
All these are matters which one learns by handling.
All in all, then, I regard this as a distinctly successful recorder, quite worthy of being used in conjunction with any quality reproducing system. The range is of course restricted when the external speaker output is used; but even here, such is the quality of the output transformer, the range covers as much as one could reasonably expect. With the internal speaker the range is, of course, more restricted still, but the quality is clear and quite acceptable.