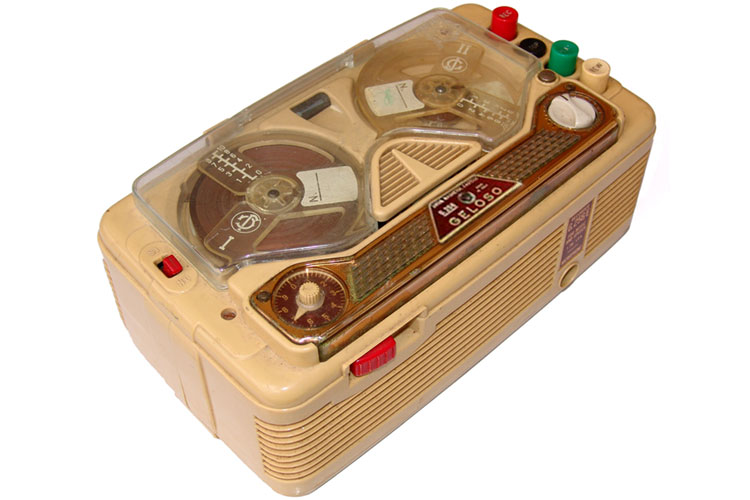 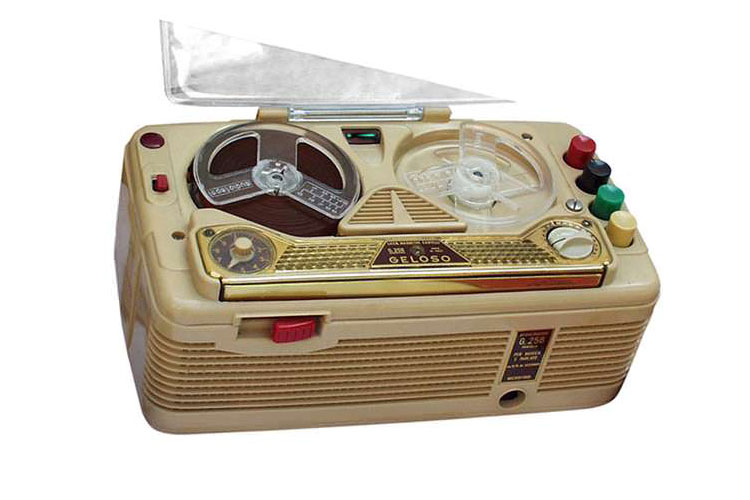 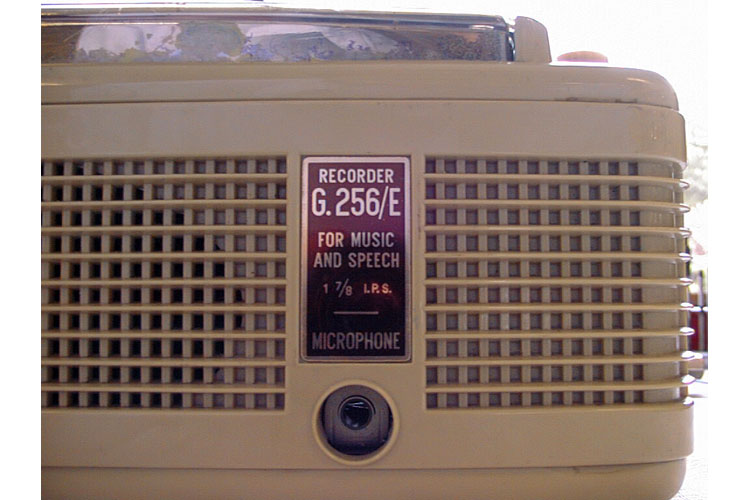 A friend found this little gem in a junk store somewhere in the Blue Mountains town of Katoomba (NSW, Australia) and thought of me – I think he paid $25.00 for it.
It takes 3″ reels and only plays at the slow speed of 1 7/8 ips, so as you’d expect the sound NOT Hi-Fidelity, however it does work and it does look very cute!

The Geloso 256 is quite the most ingenious and most compact mains-operated recorder I have yet seen. Before carrying out performance tests, I decided to have a look inside and accordingly consulted the well-written instruction book for information on dismantling the recorder (this is in Italian, but an abbreviated translation is given in English).

A few screws release five separate assemblies, the main one being the recorder chassis, with a neat printed-circuit board carrying the components and the two valves.

I have commented in another review on the use of double triodes as voltage amplifiers in tape recorders and I was not surprised to find that the Elpico-Geloso uses this form of voltage amplifier, comprising a 12AX7 followed by an EL95 output valve.

The deck mechanism is nicely finished and uses the conventional induction motor drive, capstan and pinch-wheel, so that the single operating speed of 1 7/8 ips is linear. This means that tapes recorded on this machine may be played on larger, standard recorders.

The recorder is supplied complete with a crystal microphone and reel of tape; numerous other accessories, such as “stethoscope” headphones and leather carrying case, are obtainable from the distributors.

The Elpico-Geloso is housed in a biscuit-coloured plastic case, measuring 9 1/2 x 5 3/8 x 3 1/2 inches, and is fitted with a small elliptical internal loudspeaker.

Controls are simple and clearly marked, and other facilities include a dual-speed, fast reverse and forward re-wind system, tape position indicator, the remote control stop/start socket mentioned above, and a small magic eye recording level indicator. A socket is provided for an extension loudspeaker and the single microphone input jack socket may be used for connection to the output of a radio receiver or pick-up.

Tape travel is to standard—left to right—and for half-track, so that the 3-inch spools fitted to this machine will allow 85 minutes’ playing time for both tracks, using LP tape.

Re-wind times were checked at 4.75 minutes for forward wind and 2.75 for reverse wind; this does need to be a quicker operation. The tape winds evenly and runs smoothly in the guides and across the combination record/erase head, which comprises two separate heads housed in the same container and well screened from 50 cycle motor field.

The frequency response of these small recorders cannot be properly appreciated, because the very small loudspeaker has no appreciable bass response. The through amplifier response (record/play back) as shown by Fig. 1, however, compares very favourably with that claimed by the makers.

As no tone control is fitted, the treble response cannot be boosted; in any case, a tone control would hardly be justified in this type of recorder.

Hum level cannot be estimated via the internal speaker, as quite appreciable hum in the amplifier would not be audible. The maker’s claim for noise, however, is quite justified; although measurement showed this to be quite low, such was not the case for hum, which was of the “grid pick-up” variety and was present to a fairly marked degree at full gain. Wow was noticeable on a 1kHz steady tone, which did not well support the maker’s claim of 0.2 per cent. Erase is clean, as a normal erase head is used with AC bias, and recordings generally are bright and clear. The maker’s specification includes the following facts and figures against which performance checks were made:

As so many of these small machines are now available, it seems fairest to classify them and to judge their merits in relation to one another and to price. One cannot, obviously, compare their performance with expensive, larger machines.

I would, therefore, estimate the Elpico Geloso to be one of the best of its type, giving a favourable performance at its price. It should be of particular interest to the business man, who wants a compact office machine that is simple to operate, and to those who demand a lightweight portable mains recorder with a reasonable range of facilities.