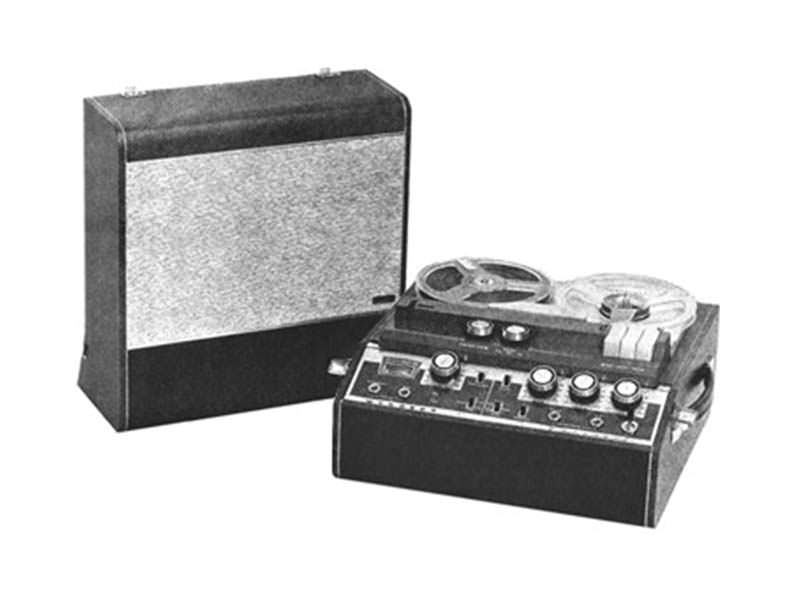 The Vanguard was launched in January 1966, shortly after a disgruntled employer had launched an arson attack on the Wyndsor factory.
The Vanguard utilised Magnavox’s new 363 ‘Studiomatic’ three-speed tape
deck and had an impressive array of features, including three heads, separate
record & playback amplifiers, double play facility, track to track
recording (sound on sound), separate bass and treble controls, 8 in. round
Goodmans Axiette speaker in detachable lid, push button operation and
straight through (4-watt) amplifier facility.
The VU meter operated on both record and playback, and was illuminated
(red for record, green for playback). Frequency response at 7½ ips
was 40c/s – 15Kc/s with wow and flutter 0.16% rms.

From Amateur Tape Recording, May 1966

Designed with the enthusiast in mind . . .
Considering its special facilities, this is not an expensive tape recorder

Perhaps the best thing that could be said of this tape recorder is ‘buy one and have fun’. A glance at Fig.1, the deck control layout, should confirm this and show quite clearly that the Wyndsor Vanguard really is a very versatile tape recorder. The inter-track and head switching system will keep you busy for hours but once mastered will permit all kinds of recording techniques from straight quarter-track mono to quite complicated sound on sound recordings. My first attempt at sound on sound resulted in something like a nightmare of screaming devils being pitch-forked into a pit of boiling water. However, a quiet half hour with the instruction book soon showed that the correct sequences of switching will allow the following kinds of recording. First it provides normal quarter track recording and replay with direct or indirect (off tape) monitoring. Then it can be used for stereo replay by employing a separate amplifier (with head amplification and equalisation) and a loudspeaker. Recording is mono only from microphone or radio, etc, or from track to track. With the tape going through in the usual left to right direction a recording can be made on either the upper or lower track and both tracks can then be replayed simultaneously or individually as required, which is useful for commentaries with background music on separate tracks as with cine films, etc.

Sound on Sound
First a recording can be made on say the upper track. This can then be balanced for level and re-recorded on to the lower track with new material, i.e., as in multi-track music recording, etc. The first recording can also be monitored whilst the transfer and new recording is being made. The original recording is not erased during this process. One can also introduce artificial echo by connecting the high impedance output back to the high level input via a suitable potentiometer or a mixer. Here an external mixer would be useful as microphone and other signals could be mixed and echoed as required. The sound on sound facility of the recorder could also be used at the same time, which again is a point of interest to multi-music makers. In fact the only thing this recorder does not have is simultaneous mixing of the input signals, namely microphone and radio or other signal source. At least one could record say music first and then mix with microphone signals by means of the sound on sound facility. Well, these are the main record/replay facilities although I daresay one could contrive a few more with the help of the switching system and perhaps an external mixer. I think the makers will agree that used with a three or four channel external mixer the Vanguard would do just about everything which makes it an interesting tape recorder for the creative enthusiast.

Some Technical Points
The Vanguard is supplied with a reel of tape, a spare spool, spare jack plugs and a BASF tape manual as well as a clear instruction book. It is not supplied with a microphone. However, Wyndsor can supply their own type WL 30 ribbon microphone which they recommend. I would also recommend this or a comparable microphone as the recorder deserves one.

Another feature of this recorder is that the loudspeaker is built into the lid thereby allowing for a larger than usual loudspeaker with more baffle area. The quality of reproduction is accordingly much better than one usually gets from an inbuilt speaker. Moreover one can have the speaker away from the tape recorder in another room, which is useful when monitoring whilst recording from the microphone.

Despite its complex nature and larger than usual loudspeaker, the Vanguard is not unduly large or heavy. It is well constructed and nicely finished, yet has the technical look and performance that most enthusiasts demand. The deck facilities include fast forward and reverse rewind, three tape speeds – 7¾ , 3¾ and 1

ips, tape position indicator, an interlocking record/replay control, bass and treble controls, separate record and replay gain controls and, last but not least, an illuminated VU type recording level meter. This lights up green on replay and red on record.

I could say much more about this recorder, but my space for reporting on it is of necessity limited. It was no doubt designed with the enthusiast in mind and considering its special facilities is not an expensive tape recorder. The electrical and mechanical performances are both excellent in every respect and as I said, once the complexities of the controls and switching are mastered, one has a truly versatile tape recorder.

The Wyndsor Vanguard retails at 59 guineas and is manufactured by Wyndsor Recording Company, 2 Bellvue Road, Friern Barnet, London N11, who will send further details on request.