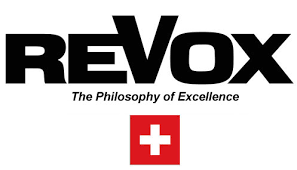 Revox produced reel to reel tape recorders from 1951 to 1986 which were manufactured in Switzerland. These tape recorders targeted the consumer and semi-pro market. The early models of Revox tape recorders used tube electronics and later on they transitioned to solid-state tape recorders. The company produced both 2 and 4 track machines available in 110-120v, 220-240v & Multi voltages.

1949 – Development of reel to reel machines, initially marketed under the name “Dynavox” –  the first tape recorder of William Studer.

1951 – Revox T26 tape recorder – a development based on the Dynavox and  used in the professional world of broadcast.

1963 – “Revox G36” – crowning achievement in the development of tape recorders in tube technology.  The first synchronous motor was used as tone motor in the Revox G36.

1967 –  Introduction of the famous Revox A77 and its counterpart amplifier A50 and FM-tuner A76. The Studer-Revox company dominates the area of advanced studio technology for decades.

1970 – Revox A77, one of the Revox’s most successful product, that sold more than 400,000 units.  Enhanced by the addition of a matched FM tuner and amplifier, resulting in a uniformly designed hi-fi system.

1977 – The Revox B77 MK I replaced the Revox A77. Controlled via tactile switches; an integrated tape drive logic controller took care of the execution and also took into account the movement status of the tape via a tape sensor.

1980 – B77 MKII with a control for the Variable Speed under the front flap. Allows you to change the belt speed by + 10% to -10%. The 1980 distributor price list contained no less than 61 models and variants, and the 1988 sales price list still listed 28 different models.

1982 – Revox PR99 is a three-motor drive, electronically controlled with A low-noise and low-distortion catch-up amplifier.

1983 – Revox B225 was the first CD Player of Revox. With the Multiroom System “Easy Line” and the B200 audio/video controller, Revox opens the innovative and trendsetting field of Multiroom technology.

Years in Business: 1964 To Present