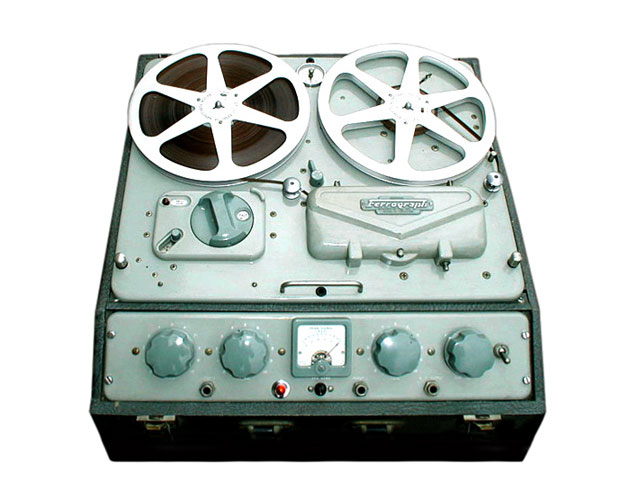 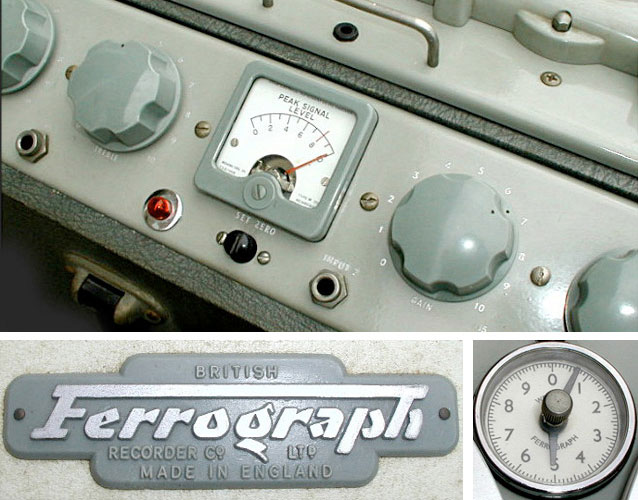 The
Ferrograph series 4 incorporated several new design and cosmetic improvements
to counter the rapidly developing reel to reel market of the late 1950s.

Stereo was beginning to make a big impact and
so Ferrograph made their new machine “adaptable”.
Underneath the hinged head cover was a socket
that allowed additional, interchangeable heads to be inserted.
Another improvement was the tape counter being gear driven instead of
the belt drive system of previous series.

The Ferrograph series 4 incorporated several new design and cosmetic improvements to counter the rapidly developing reel to reel market of the late 1950s.

Stereo was beginning to make a big impact and so Ferrograph made their new machine “adaptable”.

Underneath the hinged head cover was a socket that allowed additional, interchangeable heads to be inserted.

Another improvement was the tape counter being gear driven instead of the belt drive system of previous series.

As with earlier models, three independent motors were utilised and a pause control which had previously only been available as an accessory was now fitted as standard.

A deck-only version (model 808) was available without playback amplifiers, speakers and case. It had an enhanced frequency response and the meter was switchable for upper and lower channel.

THE “Incomparable Ferrograph” is a phrase known to all tape enthusiasts from the advertisements for that excellent tape recorder. The Wright & Weaire tape deck is the basis of this instrument, and the latest series 4 model of this deck is the subject of this review.

It is significant that the tape deck has changed but little in the many years it has been available. It says much for the original design that it has maintained its pre-eminent position in the face of increasing competition, both from this country and abroad, and is still in the forefront of domestic and semi-professional equipment throughout the world.

The deck is available in several versions, the one sent for review being the model 4 A/N. This, as do all the versions, runs at either of two speeds, in this ease, 3¾ ips and 7½ ips, and is fitted with erase head and record/playback head for normal half-track working. The model 4 AH is exactly the same, except that it is arranged to run at 7½ ips and 15 ips.

Both these models have provision for a third head, either a head for monitoring a recording whilst it is being made. or a stereo head for record/playback on two channels. These heads can easily be mounted by removing a plug-in dummy head fitted to the machine, and replacing with the desired head. Wiring is already provided to take away the necessary connections beneath the deck.

An excellent and simple means of accurate adjustment of the gap azimuth of the third head is provided and it is a pity that this has not also been provided for the normal record/replay head. The method of adjustment on this head is more difficult and not nearly so precise.

The deck is powered by three motors, two of the induction type mounted on the take-up and supply reels, and a synchronous motor driving the tape capstan. The capstan itself is mounted on the shaft of a heavy flywheel, which is driven from the motor via a neoprene idler wheel. This bears on a two-step pulley on the motor shaft, and the speed changing gear selects which of the two steps is to provide the drive. The motor is thus flexibly coupled to the capstan itself and this, in conjunction with the heavy flywheel, is the secret of the low wow and flutter performance of this machine.

During record and replay, both the tape reel motor are energised, the feed reel motor driving at reduced power in a clockwise direction, that is, in the opposite direction to the tape travel. this effectively keeps the tape in tension between the two reels, and helps to keep it lying closely against the face of the heads. In this – some assistance is rendered by felt pads pressing the tape on to the head faces.

On fast forward or rewind the appropriate reel motor is energised, and the brakes are removed from the opposite hub. Rewind is very fast indeed, being approximately 50 seconds for 1,200 ft. of standard tape. This machine will take spools up to 84–in, diameter and such a spool loaded with 1,750 ft. of standard tape still takes under one minute to re wind. Some sacrifice has to be paid, however, for this high speed, and in this case it is that the wind is not very flat, which could result in the edge of the tape being damaged if the rewound reel is carelessly handled.

Lacing the machine with tape is a very simple operation, the head cover lifting completely clear of the heads, pressure pads, and capstan/pincer wheel assembly. This also simplifies marking the tape for editing purposes, a facility too seldom found in domestic equipment.
A very easily read tape position indicator is provided, driven by a worm gear from the take-up spindle via a flexible shaft. This indicator is of the clock type, and has two hands moving over a circular scale calibrated 0-10, with each unit sub-divided into ten smaller divisions. Each small division corresponds to one turn of the take up reel, and so accurate cueing of the tape is possible.

A small button is provided on the head cover enabling the tape to be halted without switching off the motors, so that a pause can be made if required during recording or reproduction. On releasing the button the tape regains operating speed almost instantaneously.

The actual starting and stopping of the machine is accomplished by two controls. The start control is a lever, which makes the motor switches and removes the brakes from the tape reels.

This lever is spring loaded, and is held in the “on” position by means of a solenoid operated from the amplifier H.T. supply.

Switching off is accomplished by a small button which shorts this solenoid, allowing the spring to return to the start lever. This ingenious device ensures that the motors are switched off and the tape reels firmly held when the amplifier is switched off. An automatic stop is provided which switches off the motors when the tape comes to the end of the reel.

The functions of Record, Fast Rewind, Fast Forward, and Play-back are controlled by one knob which has been restyled in the Series 4 deck so as to be easier to turn. This knob, in addition to operating the tape gate levers, and arranging the motor switching, also carries switches for arranging the amplifiers for record or play-back. These switches are already wired, and tag strips on the main plate of the deck are provided for connections to the amplifiers. The speed change switch carries a wafer for selection of the appropriate equalisation.

On technical matters, careful tests established that the maker’s specification was met in every particular, and this specification therefore gives the expectation that a tape recorder based on this deck will give superlative results.

That this deck is used by many professional broadcasting and government organisations throughout the world should be a good enough recommendation for the most critical tape enthusiast. It is supplied in an excellent protective packing case, complete with a reel of tape, and an instruction book which gives complete details of a suitable amplifier. At £36 15s. for the basic model 4A, it is cheap at the price.